Today was definitely one of the high points in my life. Actually being able to talk to astronaut Tim Peake in person and hear him answer the children’s questions is difficult to beat. After all, this is what we have been aiming for – the culmination of all our hard work at Rode Heath. Huge thanks need to go to MMU for accommodating us at short notice and on a day when they were already busy with an Open Day for students. And, let’s not forget the IT team, led by John Valentine, who worked tirelessly behind the scenes to ensure that we were able to secure and maintain a live link with ESA in Germany.

Indeed we were not disappointed on any front. The excitement started about 10 minutes before the kick-off when suddenly Tim appeared in the room, sat down and started to talk to us. The first thing we noticed was that he had a set of our space passports in front of him and he was looking intently through them. I was delighted when he told us how impressed he was with all the work we have been doing. I wonder if any one filmed that piece! Seeing Tim before we started the actual event was great as it put everyone in an excellent frame of mind and more at ease.

We then had to wait about 8 minutes before the actual Hangout started, which was slightly more challenging. The children were very patient, despite being eager to get started. Fortunately, ten o’clock soon arrived and it was down to me to introduce the Hangout and the participants: the Out of This World team and the children of Rode Heath – all 200 of them, who had arrived early this morning and been bussed to Manchester Metropolitan University in Crewe to take part.

And then we were off. The team was introduced to Tim – it was great to show him the faces behind the Twitter accounts – and then the questions began. First of all we needed to find out his suggestions for our Balloon Mission: Ballistic Balloon it is then. Now we just have to incorporate this title into our patches.

Isaac Capes and Daniel Lewis started the ball rolling with their question on what had interested Tim in Space in the first place and eventually inspired him to become an astronaut. Everything was superbly controlled by the IT team who made sure the microphones were working and at the right levels. We had some excellent questions and some very informative answers. I was very proud of all the children who spoke clearly and with great expression. I was particularly impressed by Bobby Gilmour in Year 1, whose question was very difficult to articulate. He had obviously been practising!

There were some definite high points. The one for me was when Tim revealed that he was wearing our #Talk2Tim T-shirt. I am still smiling about that. What a great ambassador he is for his profession. I haven’t watched the video on YouTube yet, but watch it here if you missed it:

It’s going to make a great resource for anyone wanting to learn more about the ISS and Tim Peake.

I really hope that other schools will be as inspired as we have been and take the opportunity to use our passports next year. In fact, we have a twilight session at Rode Heath on 19th March to share what we have been doing. Space really is a topic that captures the imagination and encourages children to be curious about the world around them. 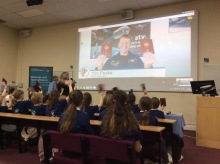 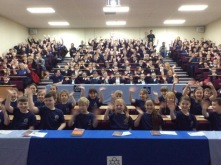 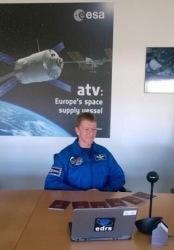