What an incredible few weeks we have just had! I don’t think anything will ever eclipse our #Talk2Tim Google Hangout, but some of our events in March have come pretty close, particularly our Ballistic Balloon Mission to Space.

#Talk2Tim It all started at the end of February when every single member of staff and all Rode Heath pupils travelled to Manchester Metropolitan University for our live chat with Tim Peake. This was one of the key objectives of our passports and something we had been working towards with ESA in Germany for a long time. Without the relationships we have been developing, particularly with MMU, whose technical staff worked tirelessly to make this link possible, this momentous event would not have been possible. For over half an hour, everyone (including former pupils who had been given the morning off by their High School to take part) sat mesmerised as Tim answered our 21 questions, expertly delivered by the lucky Rode Heath pupils, who were wearing their specially designed #Talk2Tim T-shirts. Before we went ‘live’, Tim chatted with us, saying how impressed he was with the work we had been doing to promote space and how excellent our space passports were – a great endorsement. During the live event he also named our own space mission, Ballistic Balloon.

Tim waiting in Germany to speak to us.

House of Commons – Fit for Space event At the beginning of March, Clare Pheasey and Julie Wiskow were invited by Heather MacRae of Venture Thinking to take 4 children to the House of Commons to take part in a special Mission X event. The purpose was for schools to meet and listen to special guests from the world of sports, science and space and then demonstrate the various Train Like An Astronaut activities they had been involved in – an excellent chance for Rode Heath to share their space passports with the wider community. The day also presented a great opportunity to organise a meeting with our local MP, Fiona Bruce, who gave us a tour of the buildings beforehand, which included sitting in the public gallery to watch the MPs conducting their parliamentary business. The four children we took with us were extremely excited and quite stunned by the grandeur and ceremony of Parliament. It was wonderful to see them all rise to the occasion, coming out of their comfort zones to perform in front of strangers – excellent for their confidence and self-esteem. 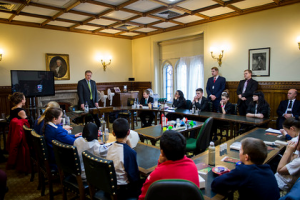 Parachute Investigation As a precursor to our Ballistic Balloon launch, the school carried out various parachute investigations, including looking at the history of parachutes and experimenting with Leonardo da Vinci’s invention. During the half term break Years 3 & 5 were tasked with designing a payload for a parachute, which had to be less than 50g. Many of the children used their newly acquired Tinkercad skills to create and print a 3D example on the Makerbot printers. On 9th March both classes were lucky enough to work with our STEM ambassadors, Roger Gittins & Dave Thompson, carefully constructing six segment parachutes to attach to their payloads. Unfortunately, as the weather was against us, these were later dropped inside the school hall from a height of about 4 metres (Mr Randall on the stage on top of a tall ladder). The time taken to fall was measured and compared with the different weights of the payloads. 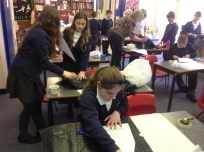 Pinning the pattern causes some problems.

Putting the pieces together is quite tricky!

The Year 3s made parachutes too.

Here are the Year 5 examples.

I wonder if they will float down gently.

16th– 20th March was Science Week and we certainly made the most of it at Rode Heath, linking it with our space theme.

Ballistic Balloon Sent into Space On Tuesday 17th March it was finally the day to launch our Ballistic Balloon into Space. The weather was just about perfect: hardly any wind and the sun breaking through the clouds. Alex and Chris from Sent Into Space arrived and addressed the school in a brief assembly, instructing the children in the science behind the balloon journey. They were impressed by the level of understanding and the breadth of questions, from children as young as 4, all of them completely focused and listening intently. The payload was decorated with the winning Ballistic Balloon patches (one winner had been chosen from each class) and finally the stickers containing each child and adult’s name were placed around the lid, which was securely fastened – the cameras and data logging equipment having been arranged carefully inside. And, with several members of the press taking photographs and John Acres from BBC Radio Stoke interviewing Jack Castle, who had been chosen to let go of the payload, the latex balloon was inflated and sent at 5 metres per second, racing towards space. https://outofthisworldproject.com/bbc-radio-stoke-balloon-coverage/

Being interviewed by BBC Radio Stoke

We were able to track the balloon in real time using SDR Radio on a laptop which was receiving signals from a UHF radio tracker in the payload and were amazed by the rapidly changing attitude. In the end we hit 106,980 feet in a 2.5 hour flight that landed 29 miles away, a little to the northwest of Matlock. It was left to Alex and Chris to follow/chase it down, which seems to have been the right decision, as the parachute (with payload attached) landed 120ft up in the trees. We received the payload, pictures and data back later in the week and are looking forward to working with some great images and information!

Rode Heath CPD Event for Sandbach Primary Schools Thursday after school was a very important event for Rode Heath and the Out of This World project, as this was our chance to share our work with the Sandbach schools in our cluster. A number of them had dialled into the Google Hangout with Tim Peake, so already had some understanding of what we were trying to achieve. More than 50 teachers arrived at 4pm to listen to Dr Allan Clements, manager of UK-ESERO (the European Space Education Resource Office), an education project of the European Space Agency (ESA). Also there, was a representative from STFC, another organisation interested in having a presence in our passports.

Following a brief presentation by Allan, teachers were invited to attend year group specific workshops to learn about the many activities that have taken place this year. It was great to see all the Rode Heath teachers enthusiastically promoting the project and not just the Out of This World team. And, not only the teachers, but many children had volunteered to stay behind to share their work, including demonstrating CAD modelling with Tinkercad; programming using Kodable, Raspberry Pi and Scratch and performing some of the Train Like an Astronaut activities involved in Mission X. Altogether, it was a huge success, with several schools wanting to take up the passports in September. 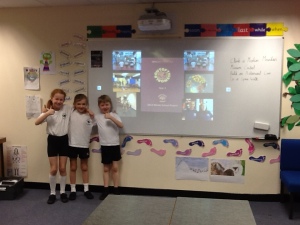 Year 3 children waiting to demonstrate their Train Like an Astronaut skills.

Allan’s comments at the end of the session were amazing: What a fantastic afternoon. Rode Heath has taken the idea of using space to inspire pupils learning to the next level – It is also excellent that they are now sharing their great work with other schools. I am very pleased that ESERO – UK was able to help initiate this project. Julie, Carl and the rest of the team at Rode Heath have built on this concept to become one of the leading schools in Europe (and probably the world) in their use of the space context to enrich teaching and learning.

The Solar Eclipse & Thermal Imaging Workshops And, if that wasn’t enough, the week ended with the spectacular solar eclipse. Year 6 started early to measure light levels and at 9am we gave the juniors a final safety briefing, issued them with eclipse glasses (courtesy of STFC) and then all of us trooped out onto the playground. Wendy Cotterill from Daresbury Laboratory had brought a Solarscope, which gave some amazing views of what was happening and a spectacular photograph. What an amazing experience for the children! Twenty minutes later, having witnessed the moon passing directly across the Sun and felt the temperature rapidly reduce, we all headed inside to look at the data we had collected and start a series of exciting workshops with Wendy learning about ‘invisible light’ with an infrared camera. What a week! What a science project! 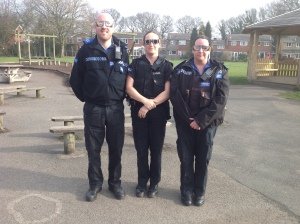 The challenge of inspiring children is to demonstrate and give them confidence in what’s possible. In conceiving the ‘Out of This World’ project we set some challenging goals to ‘reach for the stars’, understanding that if we didn’t quite achieve it, we would nevertheless have accomplished something quite extraordinary. The reality is that we have achieved far more than any of us expected: we have made it into Space; spoken to astronauts, but more than that, we now have children who are motivated and wanting to come to school in the morning to learn about STEM subjects, which before this year were not top of their priority list. And, the reach has actually been much greater than that. We have inspired schools throughout the UK, who listened into the Google Hangout (nearly 5,000 views so far!); we have over 300 followers on Twitter, many of whom are prominent scientists and space organisations; we have developed relationships with MMU, ESA, ESERO and STFC who all want to work with us going forwards. More recently, we have had teachers from schools around Cheshire coming to look at what we have done and how we have done it, so that they might replicate it in their own schools. We’ve had press and radio coverage across the West Midlands and East Cheshire and on local level we have changed the nature of engagement with parents from our school with more fathers working with their children than ever before – due to the 3D modelling and printing.