Quite a short blog this week, as it’s been half-term, although school work has inevitably gone on. The main thrust was to put the 5 minute video together for the Rolls-Royce competition. Fortunately, I had plenty of footage to work with – it was deciding what to include that was the problem. Having reviewed the clips, I think that next time, if we are going to read from pieces of paper, we need to focus more on where we hold our scripts. I definitely don’t look as if I am looking at the camera – in fact, it’s quite disturbing to watch. Good job I’m not on camera for long.

To be fair though, I have started to look more closely at videos on YouTube and quite a few of the ‘actors’ seem to have wandering eyes. Perhaps we should invest in an autocue for next time!

To produce the final edit I used iMovie on my Apple MacBook Pro computer and I am pleased with the results. I think it tells a good story and puts across our message quite succinctly. Let’s hope Rolls-Royce think so. I have included all the raw footage on a DVD, as well as my film, for their media department to be creative with.

The other important event of the week was a visit to Daresbury Laboratory. I had been invited earlier in the term by Wendy Cotterill to an access afternoon and I took my colleague, Sharron Ross, with me. I thought it would provide a good opportunity to make some contacts and try and establish a relationship with their education team.

The afternoon was primarily for employees and their children and it started with an excellent hour long talk by Dr Phil Manning entitled ‘working with Dinosaurs’. He was extremely entertaining and both Sharron and I learned a great deal. I particularly liked his urging of children to always work at the ‘edge of their understanding’ – my philosophy entirely.

Following this, we were able to observe children taking part in a number of space-related activities, including creating a 3D Philae lander; building a comet and producing some effective deep space galaxy art – all of which Sharron is going to try out with KS1. Of particular interest was a demonstration of how to make a comet out of sand, soil, tabasco and dry ice! I think we are going to attempt this in an assembly to mark the launching of the Philae probe on 12th November – providing we can obtain the ingredients, of course!

Over the course of the afternoon, we met some very interesting and potentially useful contacts, one of whom was Louise Dennis, a STEM ambassador from Liverpool University. She was demonstrating how to program robots using a Raspberry Pi – perfect for our Year 6 class.

Wendy introduced us to her new boss, Phill Day, who seemed very interested in what we were doing. I am hoping that we will be able to develop a long term relationship with STFC and become one of their key primary partners – altogether a very successful day.

Not long now until the Rolls-Royce event at the Science Museum. I am really looking forward to meeting the other candidates . . . 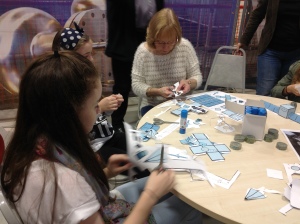 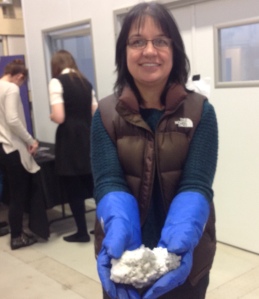