This project is all about possibilities. It’s about aiming high – literally #outofthisworld. Who would have thought that we would actually achieve a live link with Tim Peake! Well, we have and it is now a reality. The publicity is out there, so tune in 25th February at 10am. 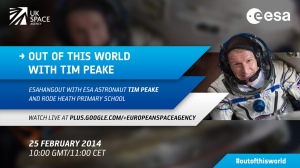 Achieving our goals is down to the hard work of everyone at Rode Heath: the teachers, the children, the parents, MMU and the Out of this World team, who have all believed in the possibilities – ‘Never ignore a possible’ (a great quote from our Year 5 class book The Rooftoppers by Katherine Rundell). So a huge thank you everyone – WOW!

All those whose questions we have selected will receive specially printed T-shirts to mark the event. These will also be available for people to purchase as a memento after the Hangout.

This week we have achieved several milestones, despite being largely focussed on assessments, our most notable of which has been the creation of our first 3D objects for the ISS. 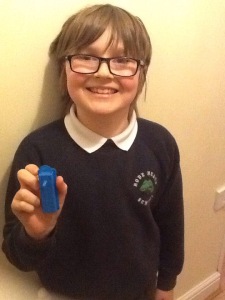 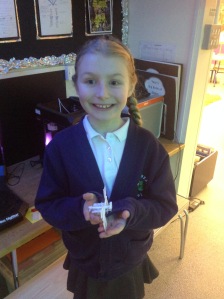 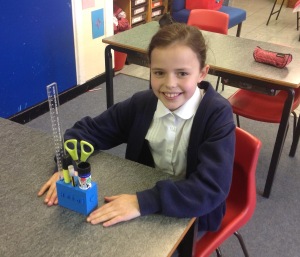 This is no mean feat, as we have been through many teething problem before finding an excellent solution in Tinkercad – again this would not have been achieved without persistence and hard work on the part of Mr Leech. Children are now able to work at home online with their parents and then send the stl file they have produced directly to school for printing. Currently, the Y5s are trialling this, but we expect to roll it out to the rest of school in the very near future.

Indeed, everyone who encounters our Out of This World project seems to be genuinely interested and keen to take part. Our Year 5 gymnastics teacher, Sarah Brewitt, has been adapting her sessions to fit in with our Train Like an Astronaut programme, linking gymnastics with science.  I asked her to write about some of the activities she chose to illustrate centre of gravity.

Partner and counter balancing involves the understanding of being ‘on balance’ which means ensuring the ‘connection point’ or centre of mass is over the point which is connected to the floor. For example, balancing on one foot will require a slight shift in the body to move over the foot you are balancing on which is in connection with the floor.

The class were asked to seek their centre of mass by standing against a wall with their hips and heels touching the wall. Keeping their hips and heels touching, they were asked to lean forwards to touch their toes. They all found they felt like they were either going to fall over or did fall forwards. When asked why they replied they ‘were off balance’ and they had to move their feet forwards allowing the centre of mass to be over point of balance which was their feet. 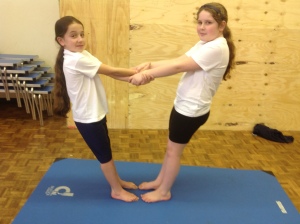 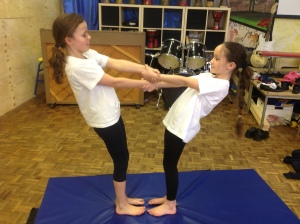 During a partner counter balance gymnasts were asked to make their feet touch, forming a ‘support base’ and cross their arms over holding wrists. When connected and ready, they were asked to squeeze their bodies tight and lean backwards keeping their bodies in a straight line. They tested what would happen if one gymnast were to lean further than the other and questioned how to balance if the mass of a person was the bigger than the other. The connection of hands became the centre of the two gymnasts and therefore this had to remain over the support base which was their feet.

Yet another fun-filled educational week at Rode Heath and this time it was the turn of Maths.  Bright and early Monday morning, the Problem Solving Company arrived complete with all manner of giant puzzles to entertain and challenge the children. It was wonderful to see every pupil engaged, from the youngest Reception child right up to the Year 6s – each key stage involved in a different 40 minute workshop.

The younger children worked with giant electronic mazes to improve their coordinate and positioning skills whereas the older children were confronted with giant tangrams intended to enhance their spacial awareness. The hexagon puzzle proved particularly difficult and I believe was only achieved by a Year 6 team. If you want to have a go at placing the six hexagons around a central hexagon, making sure that all the dots are matching, then print out the document on this webpage. Believe me, it’s not that easy! But patience is one of the most important attributes of a would-be astronaut, so bear that in mind when you are getting frustrated.  Maybe we should send a copy to NASA!

Following the workshops we all focused upon the maths objectives in our Space passports. These were wide ranging from finding fractions of stars in Year 1 to creating an Earth speedometer in Year 6. Year 3 had a very interesting week as they were tasked with weighing food before and after it had been dehydrated. This meant that the children were the first class to use our newly acquired Digital Food Dryer and Dehydrator. By the end of the week there was a very strange smell emanating from the Year 3 classroom – not entirely pleasant I have to say. This is unfortunate, as I was hoping that Mr Randall would be able to make some money selling his dried products, but judging from the expressions on the faces of those children who were indeed brave enough to taste the results, I don’t think it’s going to be a big money-spinner!

In Year 5 we had a lot of fun with rockets – investigating whether the launch angle had an impact on the distance travelled. The results were inconclusive, but we learned a considerable amount about how to conduct an investigation and what we would change to make the data more reliable and useful – facts that we passed onto the Year 4 class, who were busy with their own challenge of working out the distances of each planet from the Sun. It’s a good job that our playground and car park was long enough to accommodate their calculations.

One of the significant events of the week was our first designed and printed 3D object. This was achieved by Hermione Pugh in Year 5, who had used Tinkercad at home to create a 3D house, which she printed at school. Quite understandably, she was delighted by the result. Unfortunately, in printing, the raft that the software created had lifted slightly from the base of the platform which meant that her house wasn’t completely perfect. This mattered little to Hermione, however, who I managed to capture on film, explaining to one of her classmates about the frustrations of 3D design – music to my ears!

Another important event was the choosing of our questions for Tim Peake, which were all sent to ESA on Friday. We are hoping that as part of the interview, he will choose a name for our own Mission into Space on Tuesday 17th March (more details to follow later). I still can’t believe that our Google Hangout is actually going ahead.  Thinking about it though, it had to – after all, it’s one of the first objectives in our Space passports. And, thanks to the technical expertise of MMU and the persistence of Clare Pheasey, we are ready for 25th February – 10am our time. Although it’s a shame that we can’t invite parents to attend, it will be broadcast live on the Internet and then available on YouTube as a download. Make sure you catch it if you can! 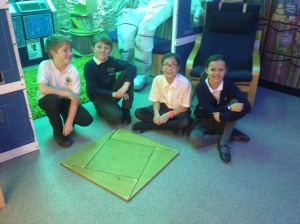 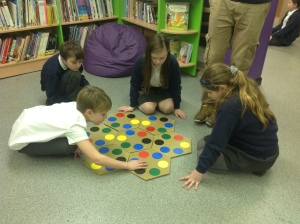 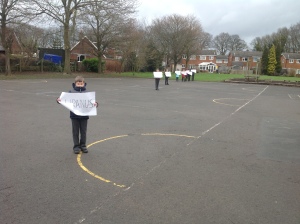 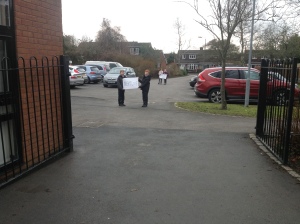 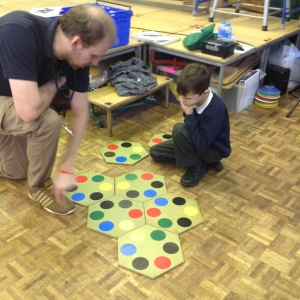 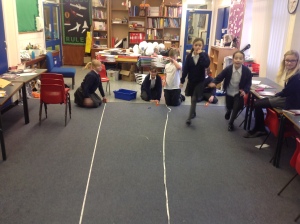 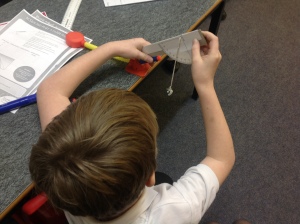 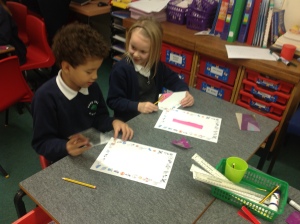 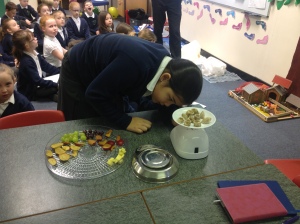 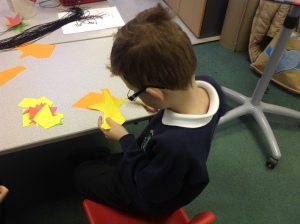 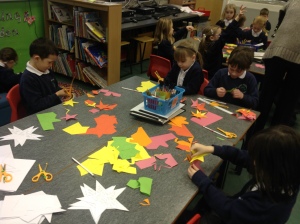 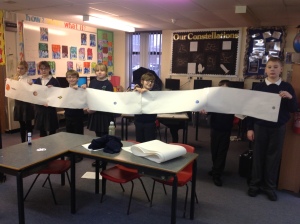 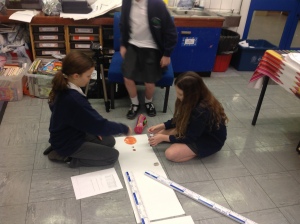 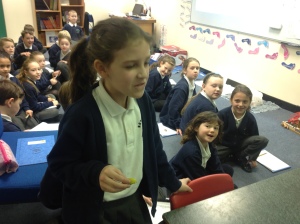