Well, more than a week has passed since my last blog. Everything is becoming very Christmassy at Rode Heath, with Year 5 rehearsing for their annual Nativity performance and the Infants putting the final touches to their Christmas play. Despite this though, there are still plenty of space activities going on.

Early last week we were fortunate to have two visitors from the department of Mathematical Sciences at Liverpool University – Paul Sapple and his colleague, Brian. I had been very intrigued to take part in their activity, which was entitled ‘Galactic Pass the Parcel’

Years 4 & 5 were the lucky classes this time and they excitedly trooped into the hall where they were asked form a large circle. Paul explained the basic rules and the music started. The parcel sent round the circle was certainly an impressive size and the children waited in eager anticipation for the music to stop.

The first layer revealed a map of the solar system, which was carried around the circle for everyone to see. This led to quite a sophisticated discussion about galaxies and black holes. At one point, I was quite concerned about the complexity of scientific language being used – but the children seemed to be understanding well and indeed, Paul commented that he had never been in a primary school where the level of knowledge about space had been so high. Just what you want to hear!

We moved onto the number of stars in our galaxy – quite a large number, but an excellent way of demonstrating multiples of 10.

The next layer revealed the planets themselves and we were quickly able to demonstrate that we knew the order they should go in. Jack had the hardest task, keeping the Sun in the air – I think that it was quite awkward to hold.

Gradually we drilled down until we looked at our own Earth and its orbit around the Sun. We then added in our Moon, which was quite tricky for the Year 4 children to act out, as well as remembering that the Earth spins on its axis every 24 hour to create both day and night. To be honest, I was amazed by the amount of learning that was packed into a single hour. Paul even talked about why we experience seasons. Finally, it all came down to matter – atoms and particles.

The activity is billed as a trip through time and space, disguised as a children’s party game and it is certainly that. It is an excellent way to explore the vastness of space as you zoom in to Earth.

You can read about Year 4’s views of the event in the latest pupils’ blog.

The event to mention is yesterday’s Mission X launch event at Abraham Moss High School in Manchester. I had been asked by Heather MacRae to speak about our experiences last year with Train Like an Astronaut and to share our Out of This World project with a collection of teachers and Space and STEM ambassadors. Two of our Rolls-Royce team members accompanied me: Clare Pheasey and John Randall, who is going to run the event in school from January.

It was an excellent afternoon and very encouraging as the audience was very enthusiastic about our project and the quality of the work we are producing. It was also a great opportunity to meet some influential new contacts, including Lynne Bianchi, Head of Science Education Research and Innovation Hub at Manchester University. I have been following Lynne on Twitter for the past few months with great interest. I am hoping that this will be the start of an exciting relationship – I look forward to taking advantage of the many opportunities for primary science teaching that are clearly on offer.

I was also introduced to Chris Beard, National Space Academy Regional Hub Co-coordinator, who has offered some help with our 3D printing in the form of training on Autodesk123d – that will certainly be really handy! 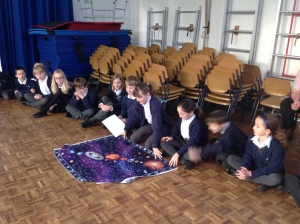