In the last week of term, Year 6 was lucky enough to have an amazing afternoon as part of the Out Of This World project.  Doctor Louise Dennis from the department of computer science at the University of Liverpool came in and told us a little bit about Robotics. It was a brilliant experience because we have never controlled miniature robots before.

Robotics, we learnt, is the branch of technology that deals with the design, construction, operation and application of robots.

Using computers we controlled smaller versions of rovers called Noor, Karen and Claudia by laptops. There were a set of instructions that we had to use so that the rover moved.  The instructions were things like: forward, reverse, right, left etc.

Also there were tasks we had to complete which were: make sure the flap was working, work on the delay and find out how long it took to go forward.

Sophie, Alex, Amelie and Isabelle worked together on Claudia.

We hope we can have this experience again sometime in life. 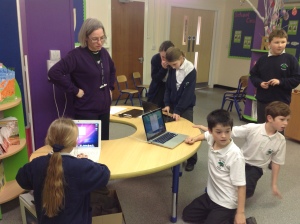